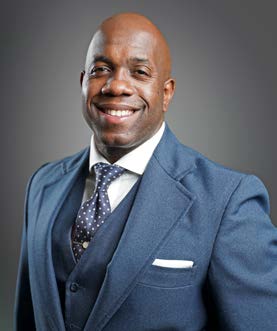 After resigning as chief magistrate, he returned to private practice at the Rhodes Firm, where he assists small to medium-sized businesses in mergers and acquisitions, corporate compliance, and due diligence.

In 2019, the Black Political Caucus of Charlotte Mecklenburg (BPC), a leadership body for the Black citizenry in Mecklenburg County, committed to informing and educating the community on the political process, voted to appoint Attorney Rhodes as its chairman.

Rhodes received his Doctor of Law degree (J.D.) and his Master of Law degree (LL.M.) in corporate law and finance from the Thomas M. Cooley Law School in Lansing, Michigan. He is also a graduate of Pennsylvania State University where he received his bachelor’s degree in political science.

Rhodes is a devout family man and member of the Empowerment Center Church. Additionally, he is a proud member of Kappa Alpha Psi Fraternity, Incorporated. He has been married to Courtney Rhodes for more than 14 years. They have four children, Khalif Jr., Camille, Cimone, and Corinne.

“When I am done, like Paul, I want to be able to say: I have fought the good fight, I have finished the race, and I have kept the faith,” says Rhodes.