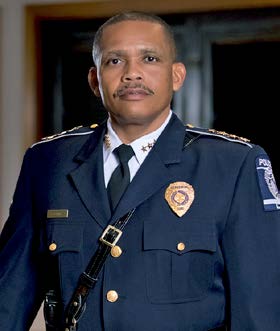 Takes the Torch and Ignites a New Era

“LAW ENFORCEMENT CHOSE ME. I didn’t choose law enforcement.” That is what Charlotte-Mecklenburg Police Department Police Chief Johnny Jennings will tell you about how he became a member of the 108th recruit class in May of 1992. He will also tell you it was the best decision he ever made.

When former CMPD Chief of Police Kerr Putney officially retired in July, the chatter had already begun about who would step into his formidable shoes. The answer was a Tennesseeborn son of a military father who, even though he majored in criminal justice at Appalachian State University, had a goal of becoming a postal inspector, not a police officer.

It was his initial perception of being a police officer— chasing bad guys, stopping cars and writing tickets—that did not intrigue him. However, after moving to Charlotte without a job and during a recession when not many places were hiring, he was talked into applying to the police department by a friend. Since then, he has worked on the force in various capacities: drug enforcement, homicide detective and criminal intelligence, which prepared him for his current role. The biggest challenge facing him and the city of Charlotte right now—community trust.

“We look at what happened in Minneapolis with the George Floyd murder . . . It’s not just about George Floyd. It was a buildup, and that was kind of the last straw. So, the trust factor —really across the nation— has been challenging for police officers,” he says.

The other concern he has is that people are judging law enforcement by images on television that “shock the conscious” rather than “the hundreds of great things in the community that law enforcement does.”

“I truly believe that I have the challenge of making sure that we’re not defined by just bad incidents, and that’s what’s the most difficult thing to do.”

Part of his solution is community collaboration. His door is open to activists, elected officials or anyone else who wants “to meet halfway and discuss how to improve relations.” It is just one part of Chief Jennings’ “Core Four” priorities, which also includes: employee wellness, professional accountability, and crime management.

“We have to make an effort to get out into the communities because if they get to know the officers and get to know the people who are responsible for their safety, then the relationships, particularly with people of color, can only enhance,” he says. “There’s been a saying the last few years that it’s ‘hard to hate up close.’ The more you know someone, the better you can collaborate and work together and come to some conclusion.”

CMPD employs training that deals with implicit bias and cultural competencies and is considering training that will educate officers on the history of policing and why people feel the way they do in relation to law enforcement. In addition, Chief Jennings developed and implemented CMPD’s paid college internship program with a partial goal of having officers in each division who grew up in those areas and know the residents there. Right now, Chief Jennings says CMPD’s jurisdiction is about 34 percent Black but only about 17 percent of officers are Black. He wants to double that number.

“I hope that in 10 or 15 years, people will be talking about Chief Johnny Jennings and the things that I’ve been able to accomplish and that the things I’ve played a role in creating here are still taking place for a very long time within the agency.”

“There’s been a saying the last few years that it’s ‘hard to hate up close.’ The more you know someone, the better you can collaborate and work together and come to some conclusion.”