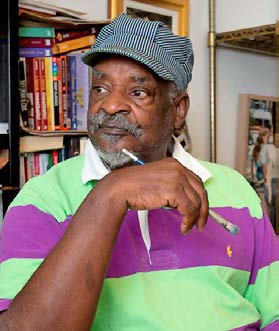 Robinson’s legacy is etched into the bones of Charlotte and his artwork spans across the city from large murals in the Spectrum Center and paintings at the Mint Museum to triptychs at Friendship Missionary Baptist Church. His art speaks to a wide range of issues, from the African-American experience to urban life and the environment.

Robinson’s interest in art was first piqued following his father’s death when he was 8 years old. His mother would allow him to draw on the walls in his room, so as part of his grieving process, he drew murals and a portrait of his father.

“When I was in elementary school, I just wanted to be an artist. I didn’t know what they made when I was seven or eight years old. But I had a very innovative mother who thought we could achieve anything,” says Robinson.

Robinson joined the U.S. Army during the Vietnam War and while stationed in Germany made money by painting portraits of soldiers and their loved ones. Upon his return, he enrolled at Central Piedmont Community College (CPCC) to pursue an arts degree and was later hired by the college to teach painting and ceramics. He got his first studio at the age of 24 and began his life as a fulltime artist.

Robinson is originally from Newport News, Va., and later moved to Charlotte after his father’s passing. He has been nationally recognized for his craft and even served as the seventh Africana Artist-in-Residence at the University of North Carolina Charlotte in 2015. In the last few years, he has devoted himself to producing pieces that bring him joy.